PetroPeru, Grupo Melka and the Congress of the Republic of Peru: “Driving us to Extinction” 2019 Awards winners

On July 17th, different companies and government institutions were given prizes for the 2019 “Driving us to Extinction” Awards organized by the Citizen Movement against Climate Change (MOCICC by its initials in Spanish). The winners for this year’s awards were: Petroperú, Grupo Melka and the Energy and Mining Commission of the Congress of the Republic of Peru. More than two thousand votes were submitted and over a hundred people assisted the awards ceremony.

The “Driving us to Extinction” 2019 Awards were divided into three categories and each included three different nominees that the general public was able to vote for. The first category, Dinopetroleros; created for companies that have caused environmental damage in the process of getting access to fossil fuels, was won by the state company Petroperu. They were nominated for their extensive history of oil spills in the Peruvian Amazon region. The award was presented and given out by Igler Sandi Hualinga, an indigenous leader and a PUINAMUT representative, who has faced the effect of these oil spills first hand and was able to share the experience of hundreds of people that have been directly and indirectly affected by these activities. 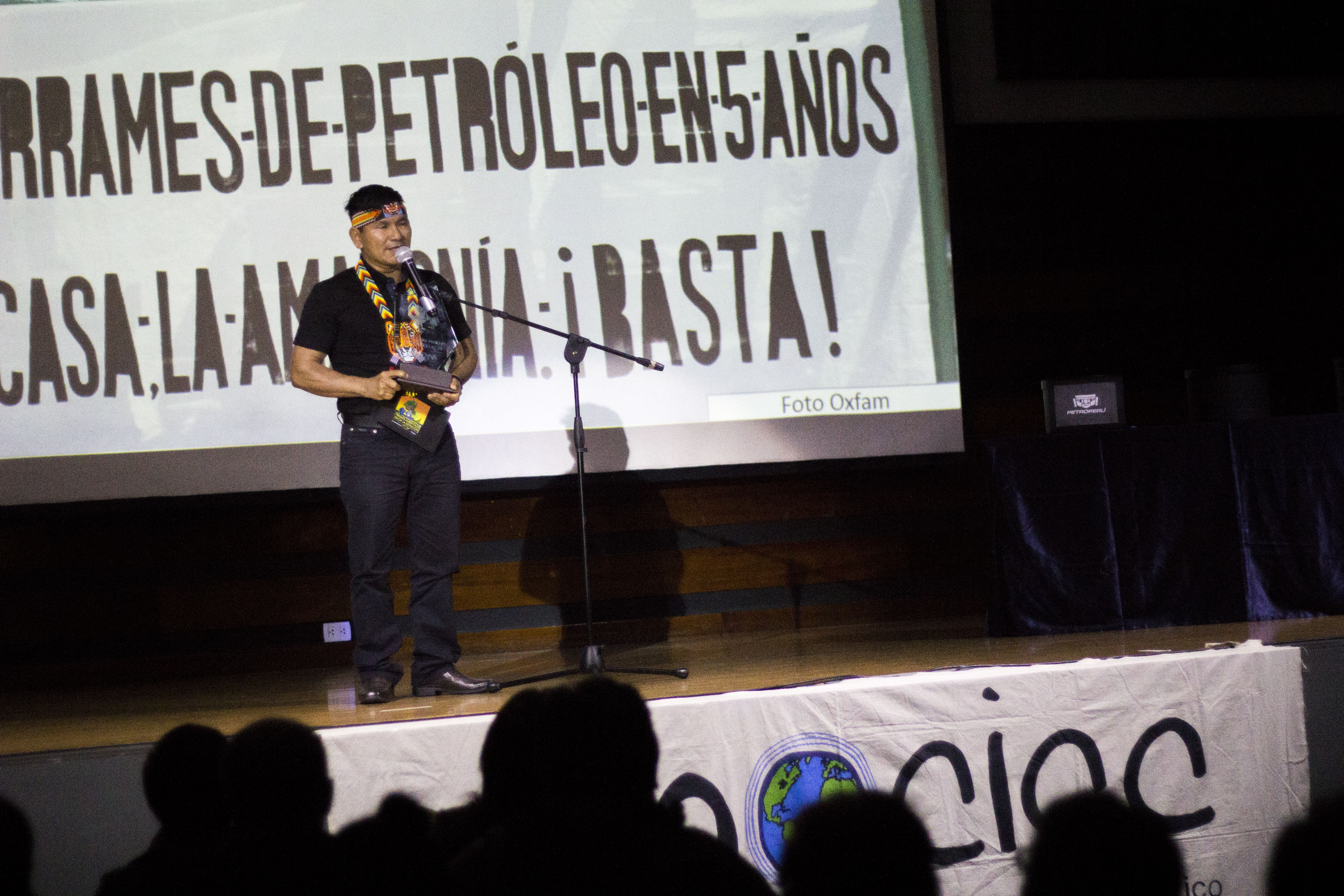 Petroperu became the company with the most amount of sanctions given by the Environmental Audit and Evaluation Institution in 2018, when it received a fine for $172,140 USD for failing to implement corrective actions after two oil spills took place in Loreto in 2015. In 40 years of operation, the North-Peruvian pipeline, there have been 108 environmental incidents, 22 of which took place between 2016 and 2018. As a result, the fauna and flora of the region was severely affected, as well as the health of the indigenous population who reside in these areas.

Petroperu is responsible for spilling 50 thousand gallons of oil in the Marañon river in the Amazon and Cajamarca in May, 2006, the spill of 2660 oil barrels in the Cuninico gorge in June 2014, and the oil spill in the Pastaza gorge in May 2018, among others.

It is worth mentioning that the results were almost a close tie with the oil company Pluspetrol, which benefited from the law 20230, known as the “Environmental package”,  which absolved them from paying monetary sanctions adding up to $1,833,977 US. In 2013 Pluspetrol tried to hide an oil spill in a lagoon by not informing the environmental supervision institution. In order to resolve the problem, the company decided to drain and clear the ground of the lagoon without any authorization by any entity.

The second category, Bosquicidas, was selected for those who have caused damage through deforestation. The winner for this category was Grupo Melka. The price was presented and given out by the indigenous leader Atilio Nuningo Noningo, a representative of the Autonomous Territorial Government of the Wampis Nation, who also had the chance to speak about the detrimental effects deforestation has had in their communities and the jungle. 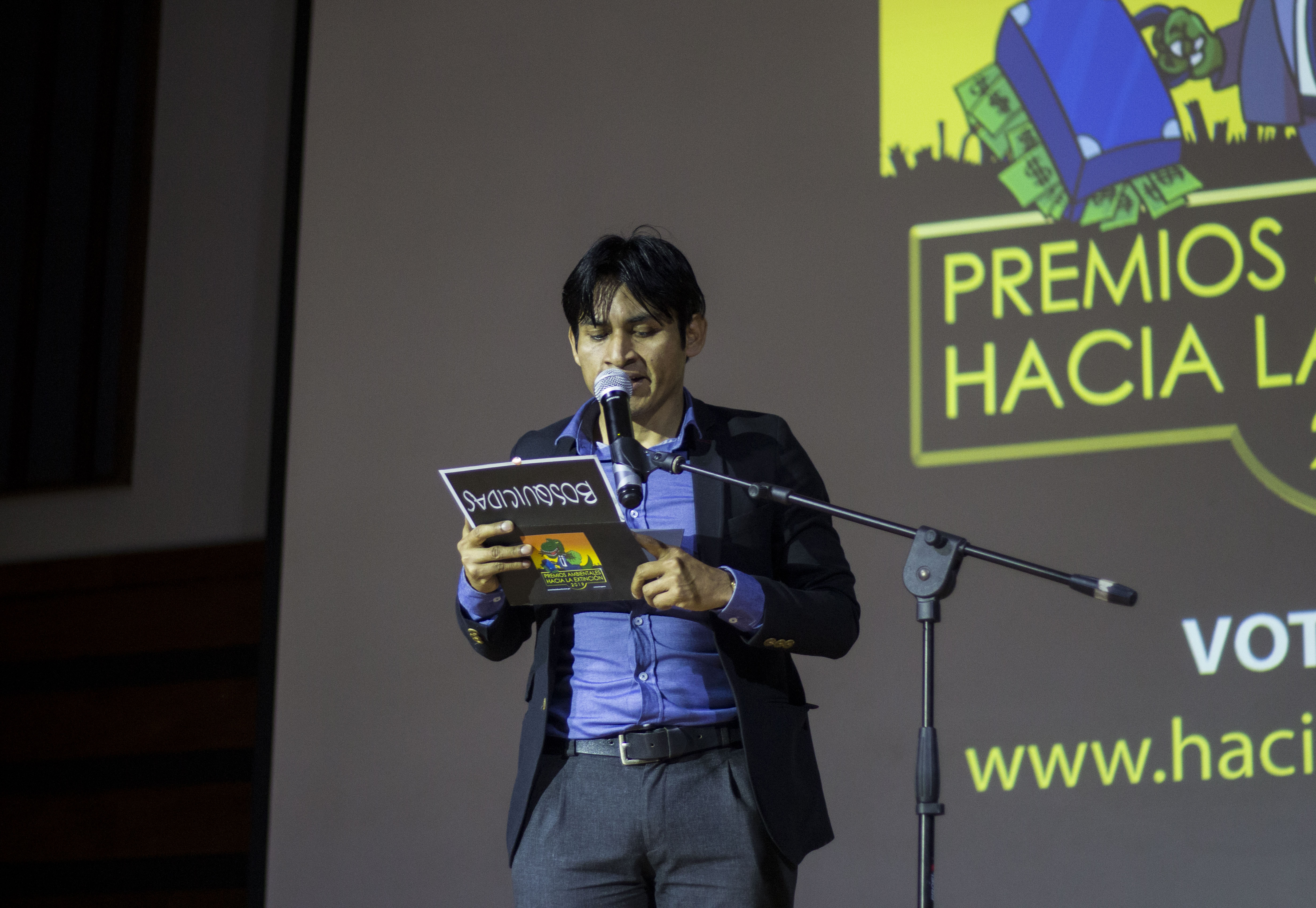 Group Melka, as of 2016, was made up by 25 companies. Their shares are mainly found in the regions of Ucayali and Loreto where they have deforested more than 13,360 hectares of forest, according to the Ombudsman office. In addition, the Ministry of Agriculture and Irrigation has mentioned that the group had started operations without having any permits or legal certifications needed, as well as failing to meet the requirements for appropriate waste management and carrying out activities in environmentally protected areas.

Lastly, Disfuncionarios; the third category was created for institutions that promote laws that have a negative impact on the environment and by default contribute to climate change. The winner for this category was the Energy and Mining Commission of the Congress of the Republic of Peru, led by Miguel Román. The prize was presented by the leader Betty Marcelo Lopez, representative of ONAMIAP, who highlighted a few of the reasons why several bills should not be approved due to the impact that they have on indigenous communities and their collective rights.

The winner was nominated for the proposal of the modification of the organic hydrocarbons bill. This new amendment would extend the timeline for project concessions for the exploitation and operation of oil lots in Peru, reducing investigative abilities and it would enable fossil fuel companies to request the protection of the armed forces and local police. This bill would also allow new procedures, like fracking, to be introduced into the oil industry. A technique that consists of breaking the bedrock that is attached to the oil deposits through the injection of high pressure water mixed with a number of chemicals that can easily contaminate the ground and water resources; a process that has been banned in several European and Latin American countries due to the damage it causes. 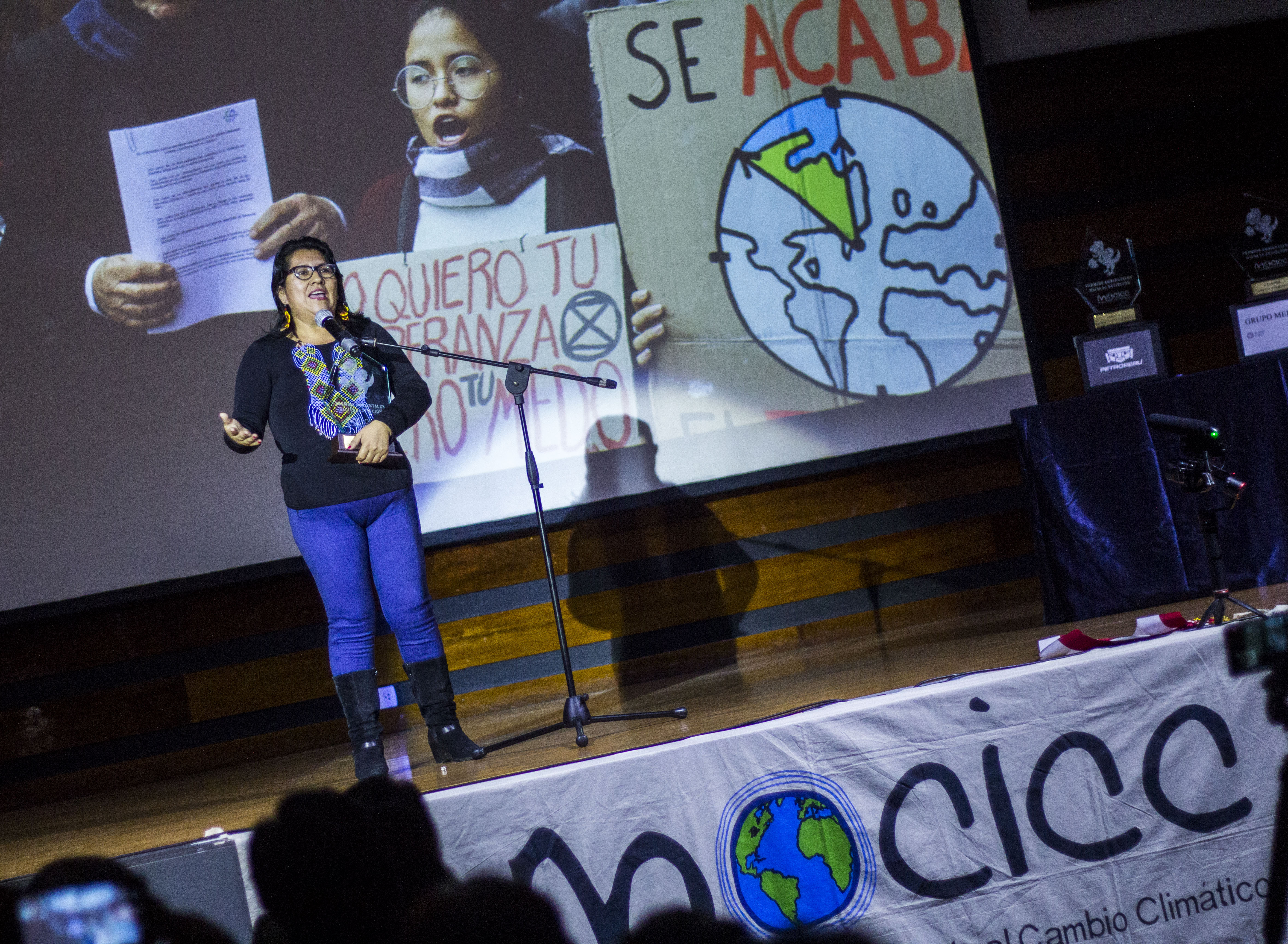 The Energy and Mining commission approved the technical decision without allowing a fair and rightful participation of the actors that would be directly affected by the new legislation, like the indigenous communities. Processes like this should always have a preliminary consultation process since they affect indigenous population’s collective rights.

The closing speech was given by Romina Rivera, National Coordinator of MOCICC, who made a public call to the audience to participate and take action against climate change and environmental challenges. The next event will take place on September 20th, as there will be an international mobilization for climate change action where MOCICC will participate in order to encourage more environmental action.  After her speech, the awards ceremony was concluded with singer, Pedro MO, and the Sikuris group, Juventud Jacha, performances. 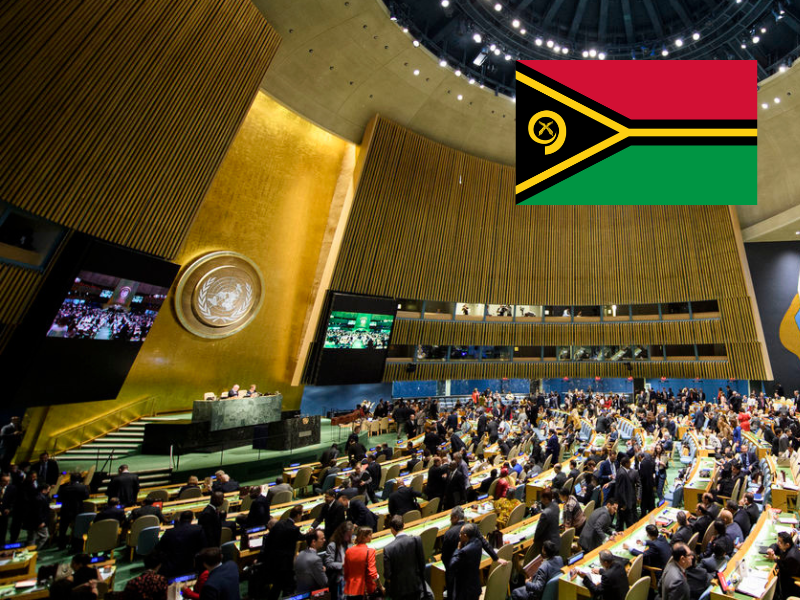 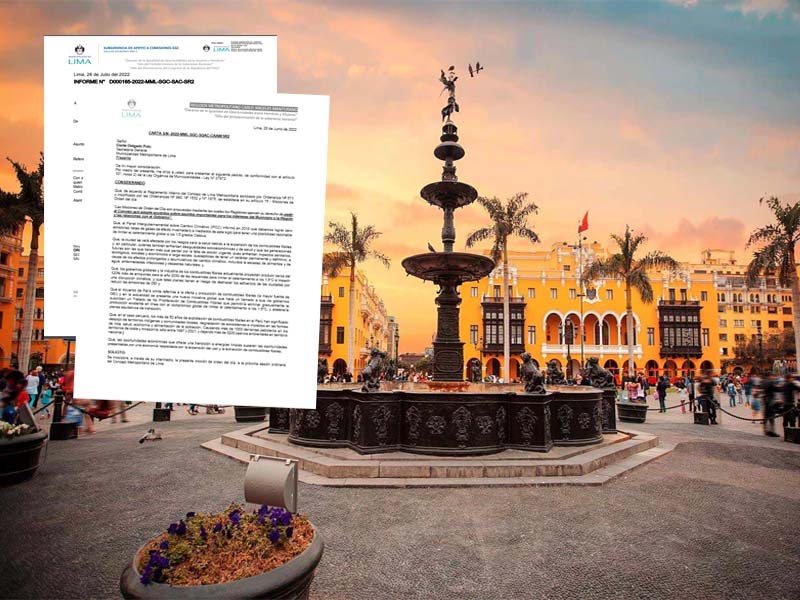 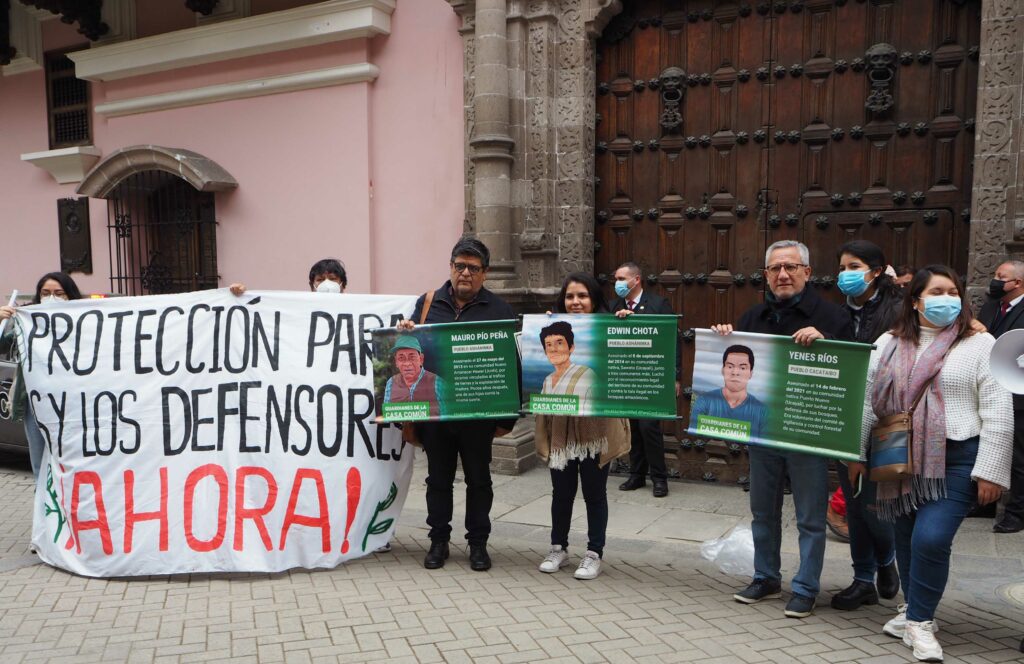 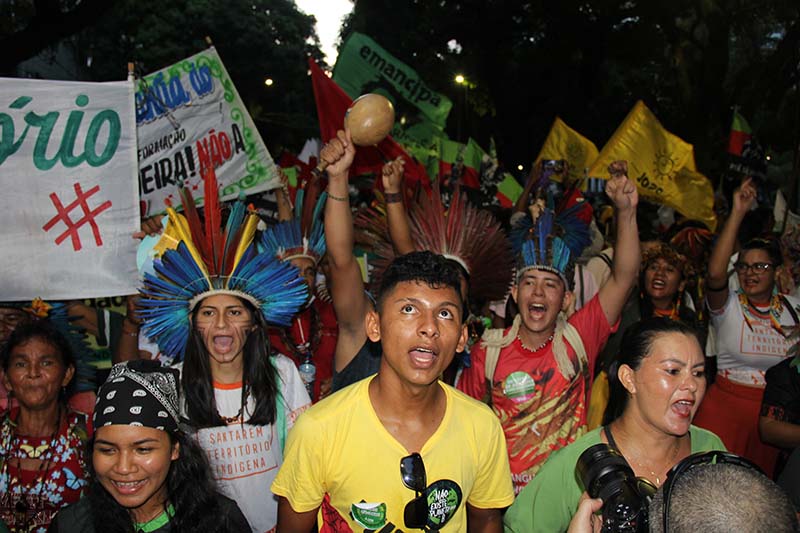 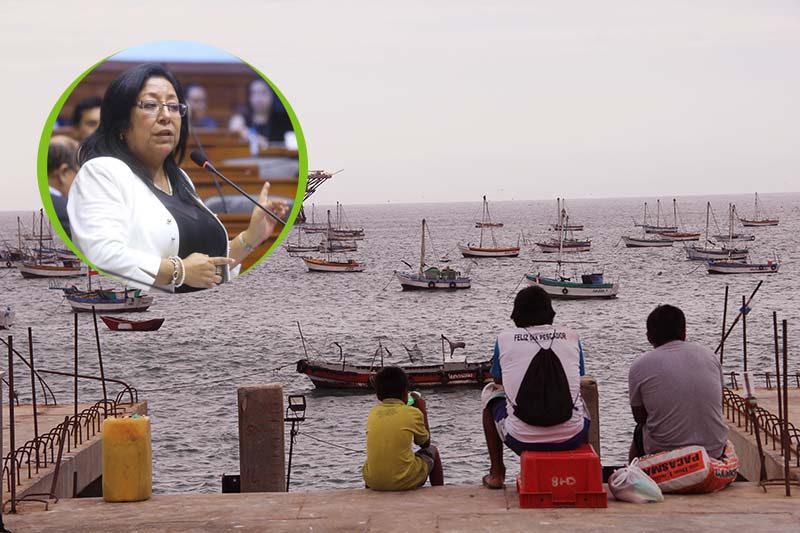